A big and hearty “thank you” to everybody who came out to see Cryoclaire and Will – our Head of Keen and D&W Hypeman-at-Large – at MCM last weekend! We sold plenty of stuff (including the very last copies of Dreamspace: Analogue Edition and the first of our all-new Cyborg Trash sketch commissions) and met some wonderful fans and creators along the way. But if you didn’t get a chance to stop by, never fear: we’re hoping to be back in town come October.

With MCM London Comic Con just days away, here’s a quick peek at the new, remastered Dan x Death print that’ll be available for sale at Cryoclaire’s table in the Comic Village.

Still need more Dan in your life? Besides our usual range of buttons, prints and postcards, you can also snag a copy of Drugs & Wires: Daily Struggles of a Cyberjunkie, a grab-bag of D&W one-shots originally published on Claire’s Tumblr between 2012 to 2014. Comic Con will also be one of the last times you can get your hands on the D&W prequel Dreamspace: Analog Edition, at least for the foreseeable future. As of the time of writing, there’s less than 20 copies left from the initial print run, and we’re still mulling whether to do a reprint once those run out.

Finally, there’s sketch commissions, where just £5 gets you a Cryoclaire original to take home. All said, there’s plenty to see, do, and buy, so be there!

Since nothing boosts your productivity quite like dozens of strangers staring over your e-shoulder, Cryoclaire recently started streaming her penciling and inking sessions on Picarto.tv.

If you’d like to take a peek behind the scenes at D&W – or just need an excuse to shoot the breeze about vital, vital topics like Skyler White and the Leprechaun franchise over some bangin’ witch house – future streaming dates and times will be announced via Claire’s Twitter and Tumblr.

UPDATE: We finally have a schedule of sorts! Tuesdays and Saturdays. 8pm BST (London time) We’re usually on for 3-4 hours. Hope this helps!

If you’re a UK resident and serious about comics, Leeds’ Thought Bubble Festival is a fantastic place to meet some of the most talented creators in the field. (Seriously, just look at this lineup.) So naturally, we’re all kinds of hyped that we made the cut for the 2015 Thought Bubble Convention, which takes place alongside the Festival on November 14th and 15th.

Cryoclaire will be spreading the D&W gospel to the unsuspecting masses (and hopefully offering some neat new merch to boot), so if you’re making the trip to Thought Bubble this year, stop on by and say ‘hi!’ Though her knowledge of the human body is shaky at best and her medical ethics went out the window a long time ago, Lin the modder somehow still finds customers willing to drop good money for her services. Casually indifferent to other humans, she’s developed a bit of a soft spot for Dan over the years – much as you would for a puppy that can’t seem to stop tripping over its own tail.

While we’re still a few weeks out from Lin’s first official appearance in Drugs & Wires, this rendition by reader Nix is almost as good as the real thing (and hopefully, less likely to ‘accidentally’ leave you with massively illegal enhancements you never asked for).

Even more exciting is the fact that this is our first official fan cosplay –  but hopefully not the last! You can check out Nix’s Tumblr (NSFW) for more pictures of her costume. 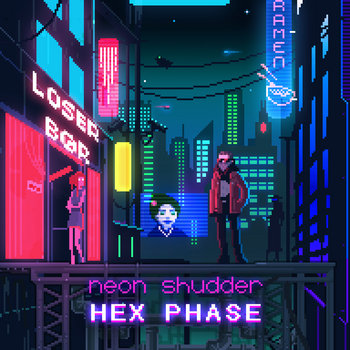 Composer Neon Shudder has been a long-time fixture in Dan and Lin’s messed-up world, having contributed backing tracks to both the second and third installments of Dreamspace. His latest EP, Hex Phase, is now available for streaming and pay-what-you-want download on Bandcamp, and features some pixel-tastic cover art from our very own Cryoclaire! If you’re in the mood for some old-school, synth-driven ambience with a distinct cyberpunk flavor, definitely give Hex Phase a spin.

The artier half of the Drugs & Wires creative team is returning to MCM London Comic Con, the UK’s #1 pop culture event, from May 22nd to 24th. Swing by her table at the Comic Village for sketches, D&W/Dreamspace merch, and possibly even lucid conversation!